There are tiny laptops and then there are tiny laptops. Even now, when thin-and-lightweight everything is the norm, I’m still sometimes surprised by just how thin-and-lightweight we’re talking. Such is the case with the new Acer Swift 5, which is officially billed as “the lightest 14-inch clamshell notebook that offers the option for dedicated Nvidia GeForce graphics.”

A bit convoluted, but I think what Acer’s trying to say is it’s really damn light. The Swift 5 is a full-size(ish) laptop that weighs less than some tablet hybrids. That’s impressive—though unless weight is the only feature you care about, the Swift 5 can feel limiting in other regards. Let’s dig in.

Note that Acer said the Swift 5 is the lightest 14-inch with the option for a discrete Nvidia graphics card, specifically the GeForce MX250. And I stress option because our review unit didn’t include one. 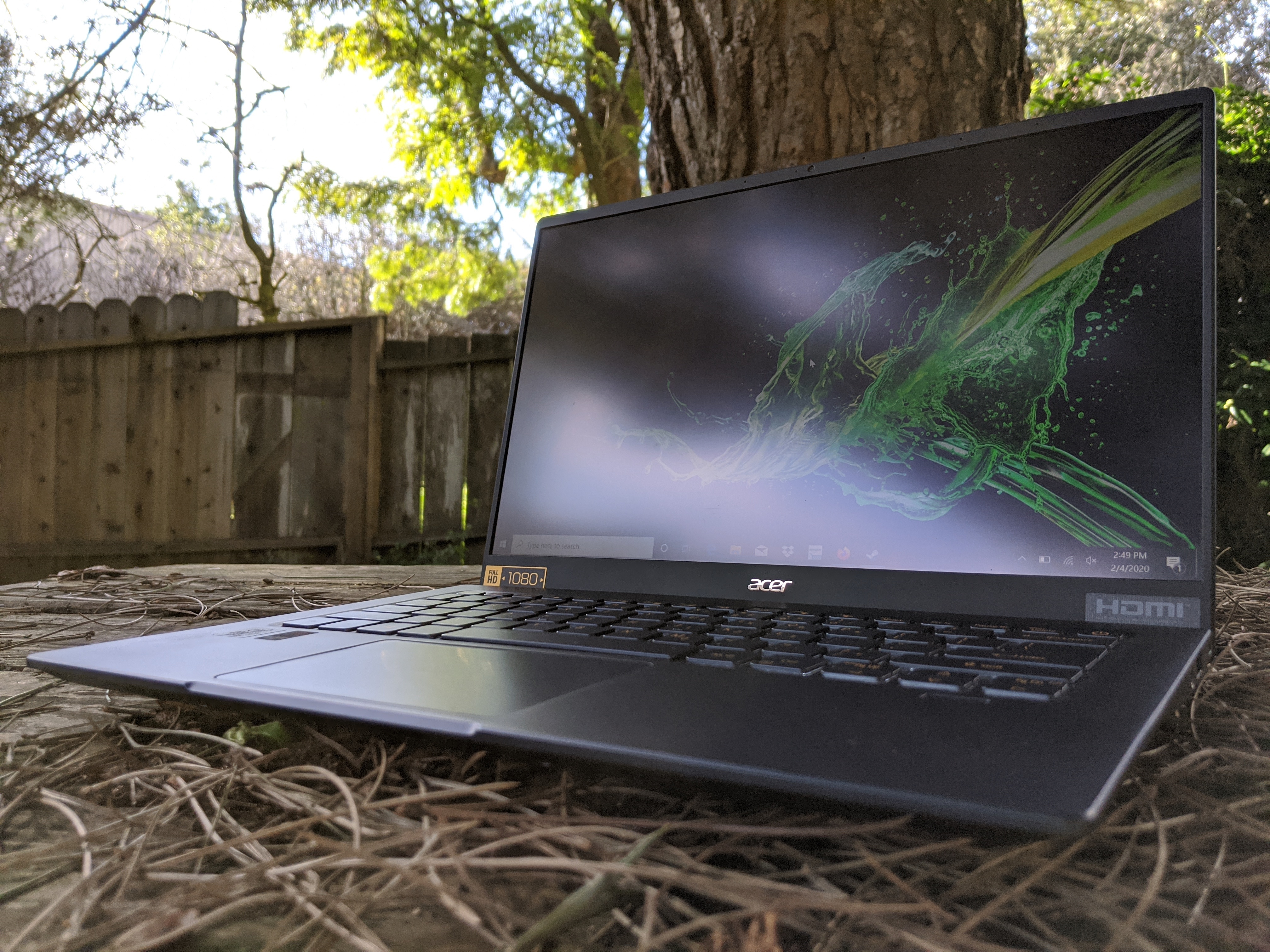 And to keep matters simple, I’m only going to talk about the latest Swift 5 family members. The line is a few years old now and Acer sells quite a few models through its website, most of them equipped with Intel’s older 8th-gen parts.

There are only two new models at the moment, and ours is the more expensive of the two. The other is a $900 variant built around an i5-1035G1 processor with the latest Intel UHD Graphics. Given the small difference in price I’d probably recommend the more powerful Iris Plus machine, though for day-to-day word processing and web browsing either should suffice.

Aw, look at the wittle waptop

No matter which Swift 5 you decide on, it’s going to be small—and kind-of…cute? Cute’s a weird word to use with a laptop, but it nevertheless feels appropriate. It’s like seeing a tiger cub or something. Sure, the larger version might look sleek and ferocious, but shrunk down to half-size? Aww, it’s adorable. 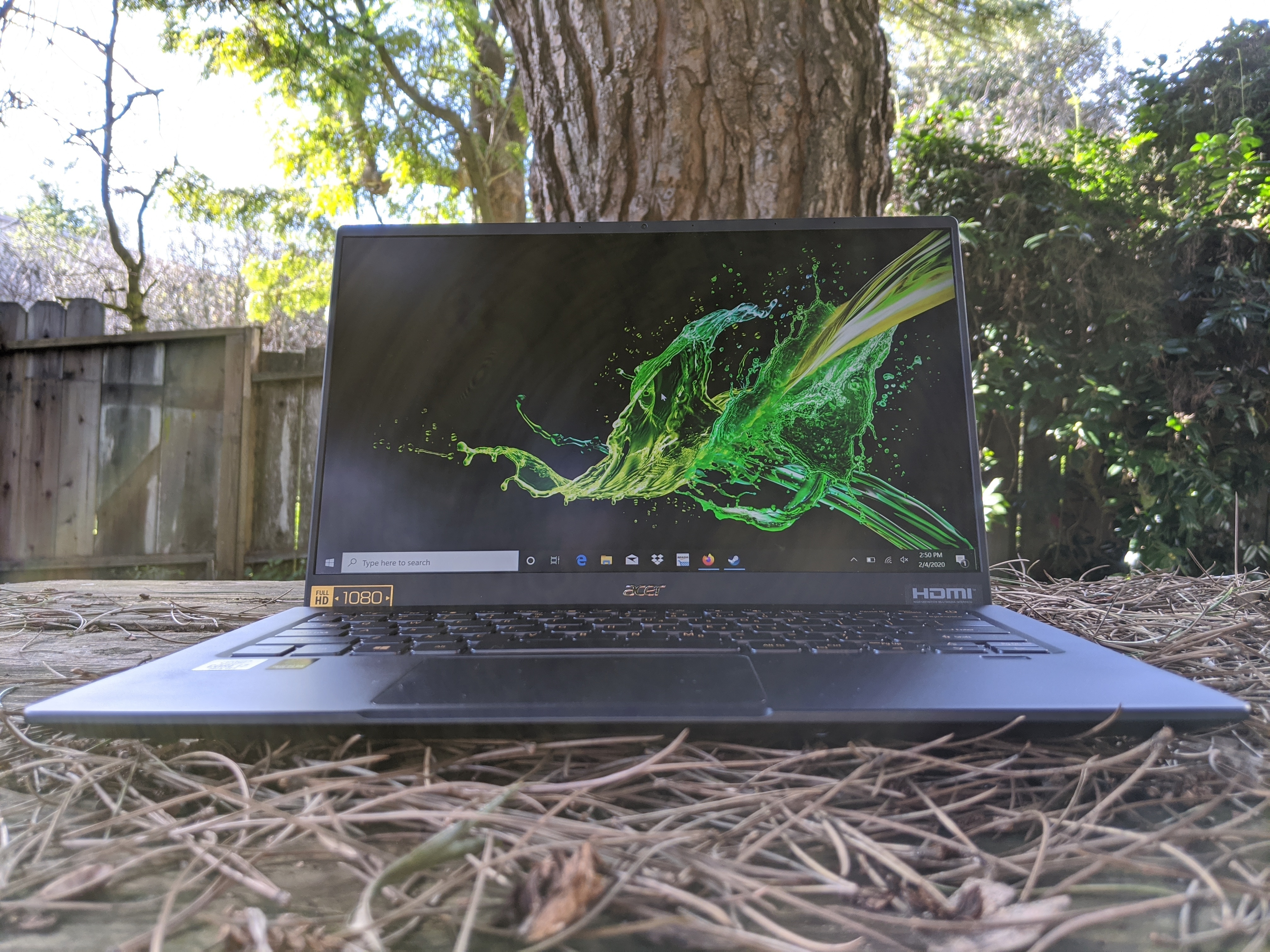 Which is not to imply the Swift 5 isn’t sleek-looking. It is, once you get past the size. Acer’s settled on a blue steel color for the metal chassis (a magnesium-lithium alloy), and while I usually prefer to stick to neutral tones I have to admit that the Swift 5 looks pretty stunning in person. The effect is heightened by using gold for the keyboard lettering, which could have been tacky if it weren’t such a subtle contrast.

That’s not the lightest device we’ve ever used, not by a long shot. The Microsoft Surface Pro X tablet for instance weighs in at a feather-light 1.72 pounds. Nevertheless, this is one of the lightest clamshell laptops out there, and certainly lives up to Acer’s marketing in that regard. 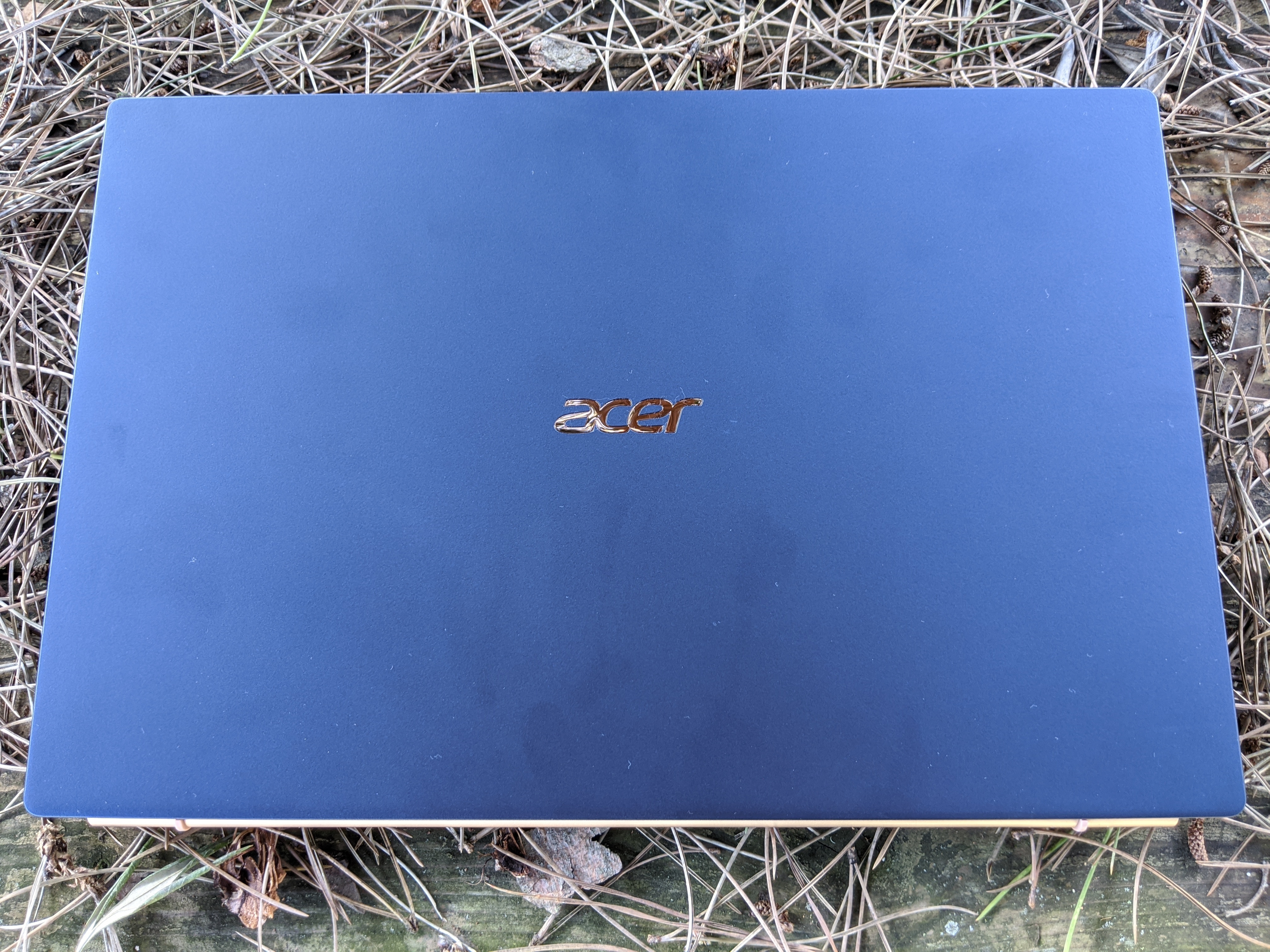 By comparison, the HP Spectre x360 13t—a 13-inch laptop with the same Core i7-1065G7 part—weighs a “whopping” 2.9 pounds. Sure, that eight tenths of a pound isn’t going to break your back, but it goes to show just how small Acer’s got the Swift 5.

And for a thin machine, it’s surprisingly accommodating. My colleague Gordon Mah Ung can rant for days about companies sacrificing USB-A ports (as on the latest Dell XPS 13 2-in-1) to shave off a few millimeters of thickness.

What do we find on the Swift 5 though? Not one, but two USB-A ports, one on either side. They join a pinhole charging port, USB-C Thunderbolt 3 port, and HDMI-Out on the left side, and a 3.5mm headphone jack on the right.

Sure, the Swift 5 is a few millimeters thicker than the XPS 13 as a result of that USB-A port—and yet it’s also lighter. The XPS 13 is listed at 2.9 pounds. How’s that for a paradox, eh? 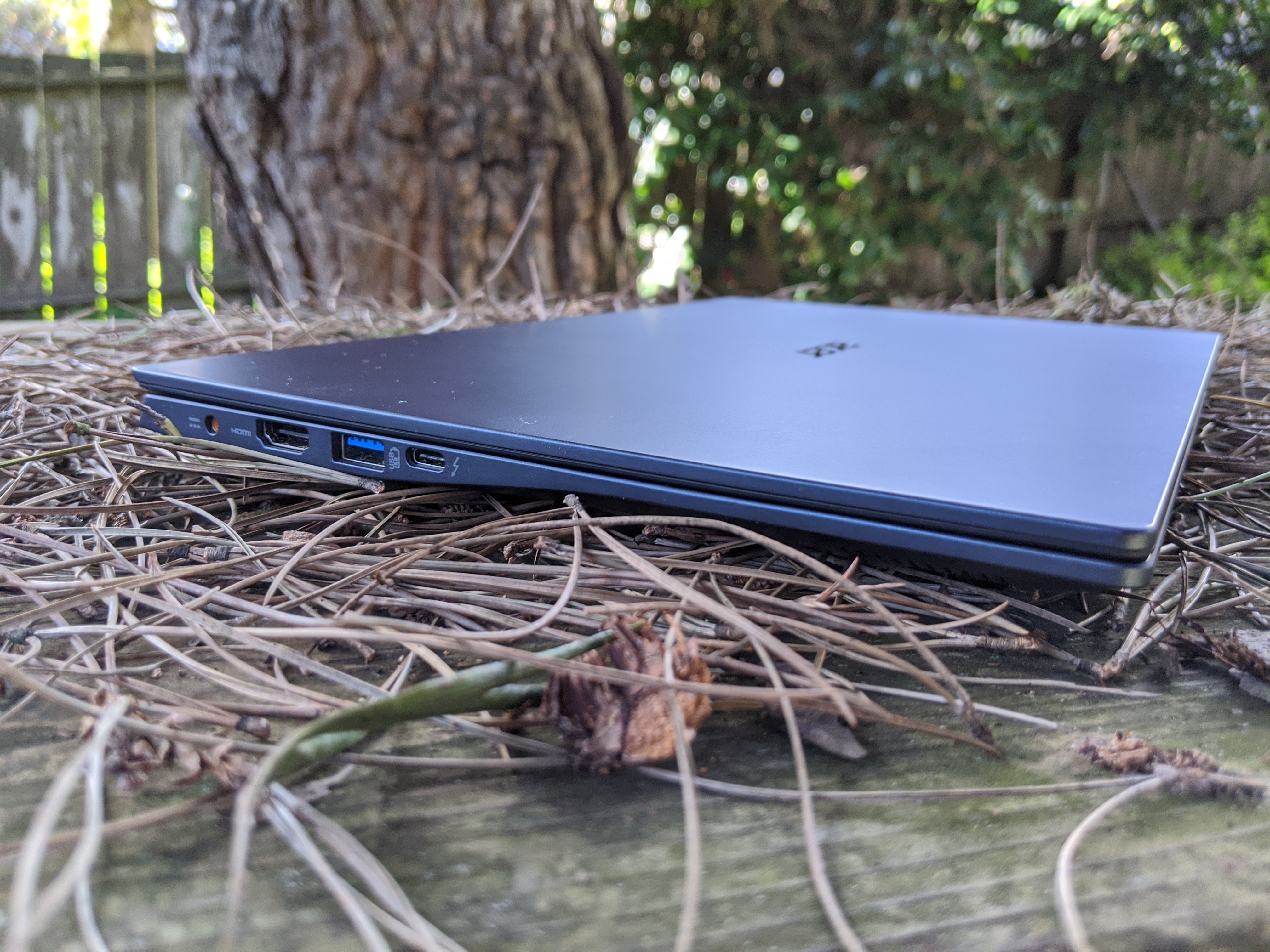 The added thickness also allows Acer to use a traditional laptop keyboard. Not as exciting as Dell’s MagLev technology or Apple’s butterfly switches perhaps, but also way less controversial. The Swift 5 won’t win any awards but I’ve enjoyed typing on it these last few weeks. Similarly, the glass trackpad is a bit small but is “good enough” for this style of laptop. No complaints, but nothing to really highlight either. It works.

On to benchmarks, then. As I said, our Swift 5 review model used an Intel Core i7-1065G7 part with Iris Plus graphics and 8GB of LPDDR4 RAM. And it does…fine.

We’ve been able to test a few of these i7-1065G7 processors now, including the aforementioned XPS 13 2-in-1 and Spectre x360. That lets us do some head-to-head comparisons. First, let’s take a look at our Handbrake test, wherein we encode a 30GB MKV file down to the Android Tablet preset, a lengthy task for CPUs of this caliber. 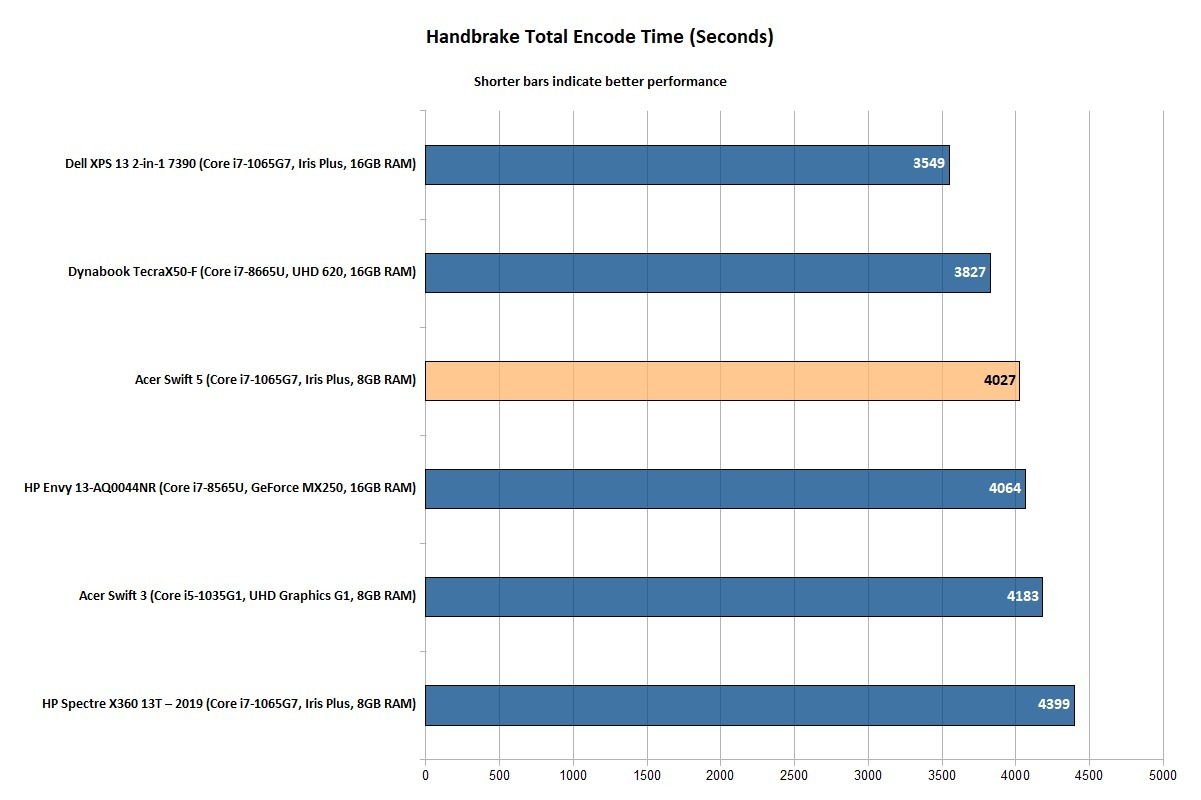 We see the same pattern emerge in PCMark 8. We run the Work Conventional test, and while Acer’s machine blows past the 2,000-point threshold for “acceptable” performance we can still see a gap between the Swift 5 and its peers, here lagging behind even the Spectre x360 on default settings. 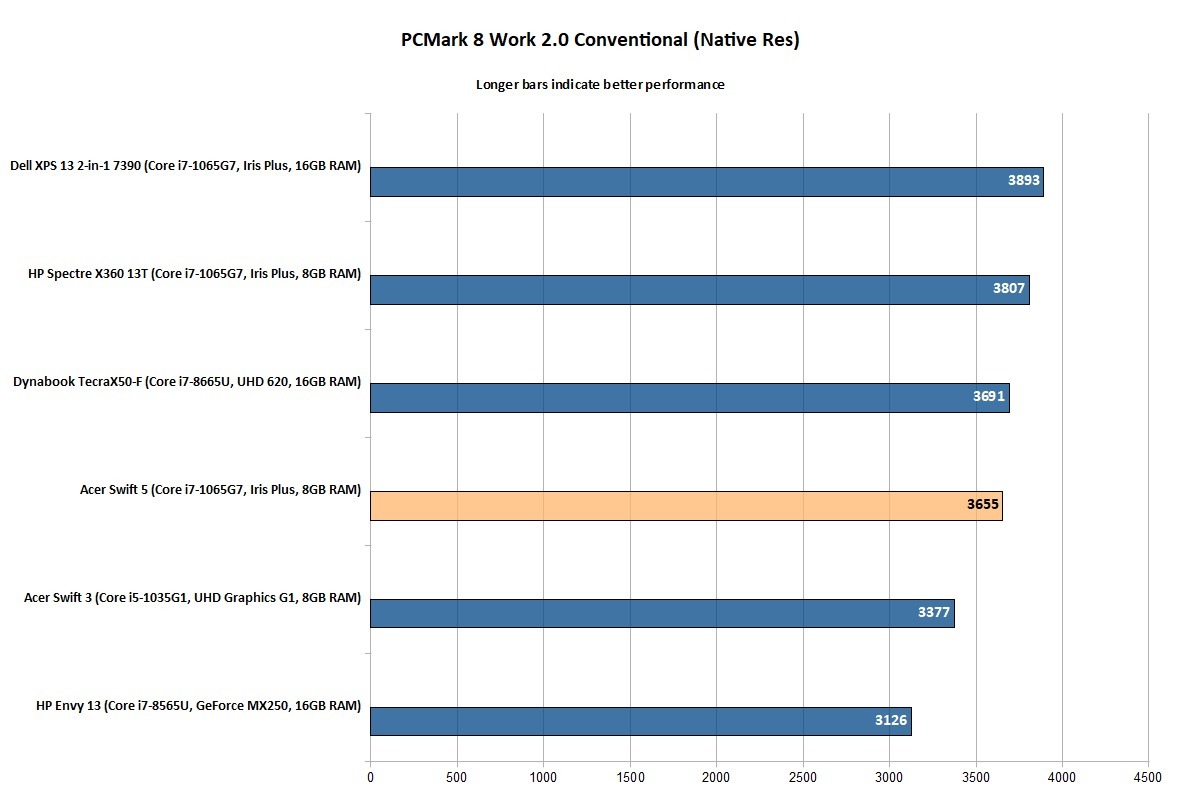 In short, the Swift 5’s i7-1065G7 implementation is fine but could be better. Single-core performance in Cinebench demonstrates that the Swift 5 is theoretically as capable as the competition, but running at full tilt Acer falls behind. 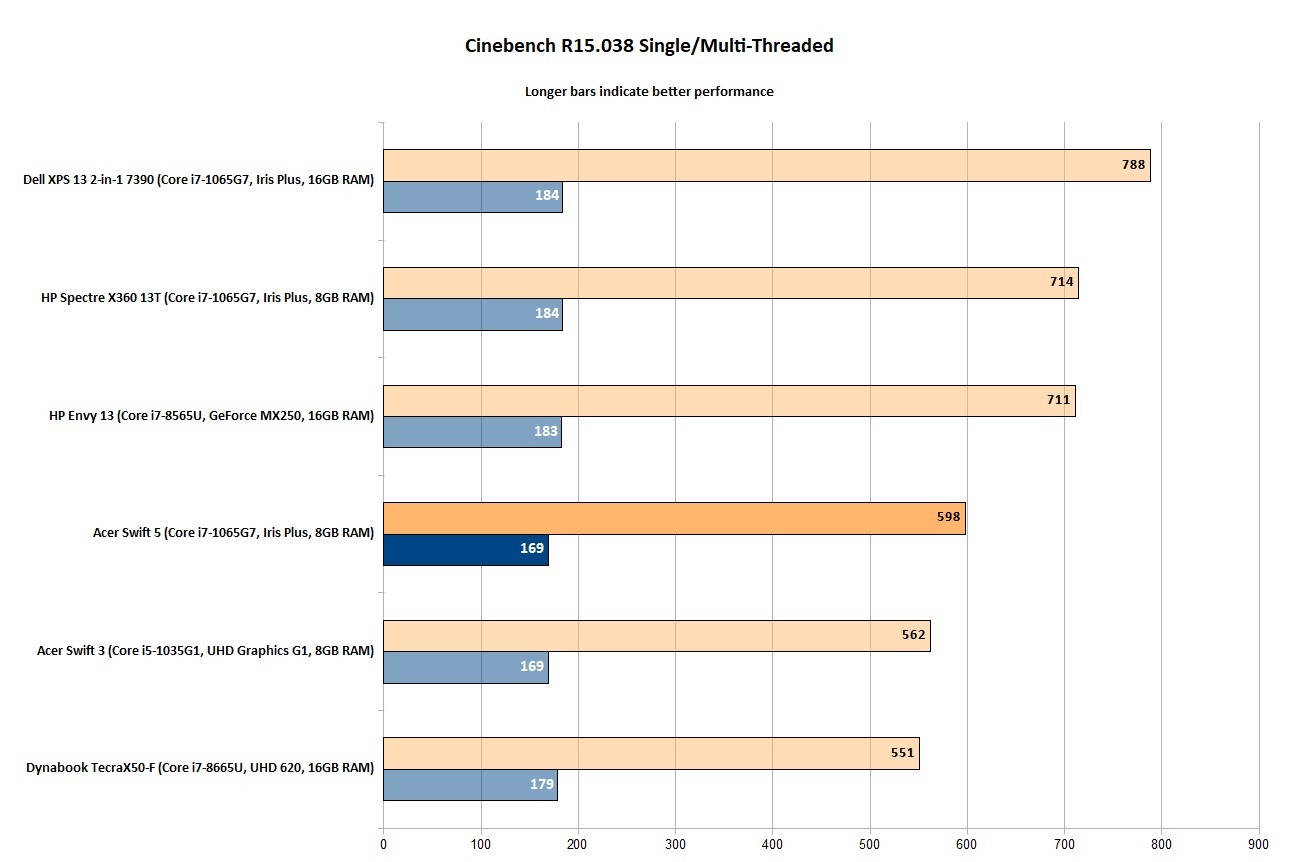 The Swift 5’s graphics capabilities are its biggest shortcoming though. The new Iris Plus graphics have proven to be a huge step over the standard Intel UHD integrated parts, both the old UHD 620 and the new UHD G1. The XPS 13 2-in-1 and Spectre x360 proved surprisingly powerful when we ran them through 3DMark’s Sky Diver benchmark.

But the Swift 5? Not so much. It still handily outperforms the old UHD 620 machines, but falls far short of its potential. Even Acer’s lower-priced Swift 3 model with the latest Intel UHD G1 setup is uncomfortably close behind. 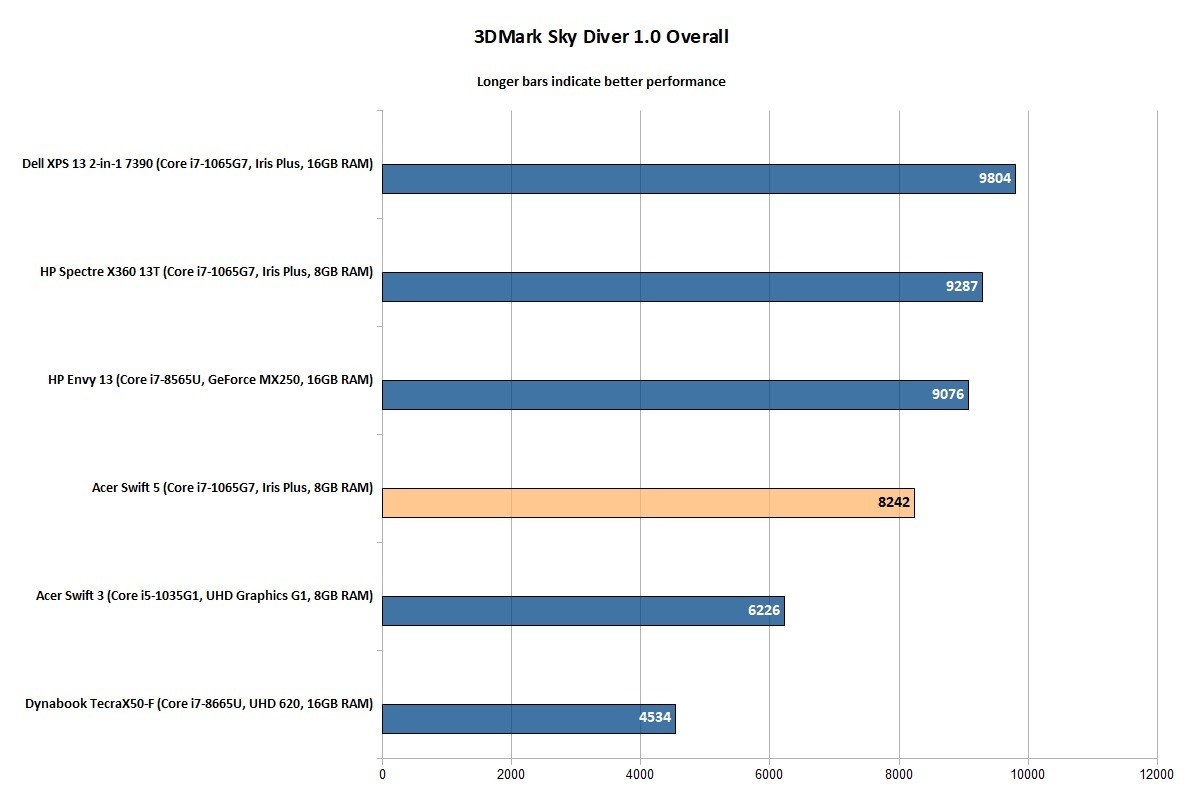 Does it matter? Probably not. Just as you’re unlikely to do heavy 3D rendering tasks on the Swift 5, I doubt you’re buying this to do much gaming. Still, it’s a disappointing showing given the Iris Plus parts have put up such stunning results elsewhere.

And then there’s the battery. The Swift 5 is, once again, fine. Hell, as someone who primarily reviews gaming laptops, eight hours of battery life seems like a miracle. Still, the fact remains that the XPS 13 and Spectre x360 will last you through an entire workday (11 hours and 15 hours respectively) while the Swift 5 will probably need a charge before you’re home. 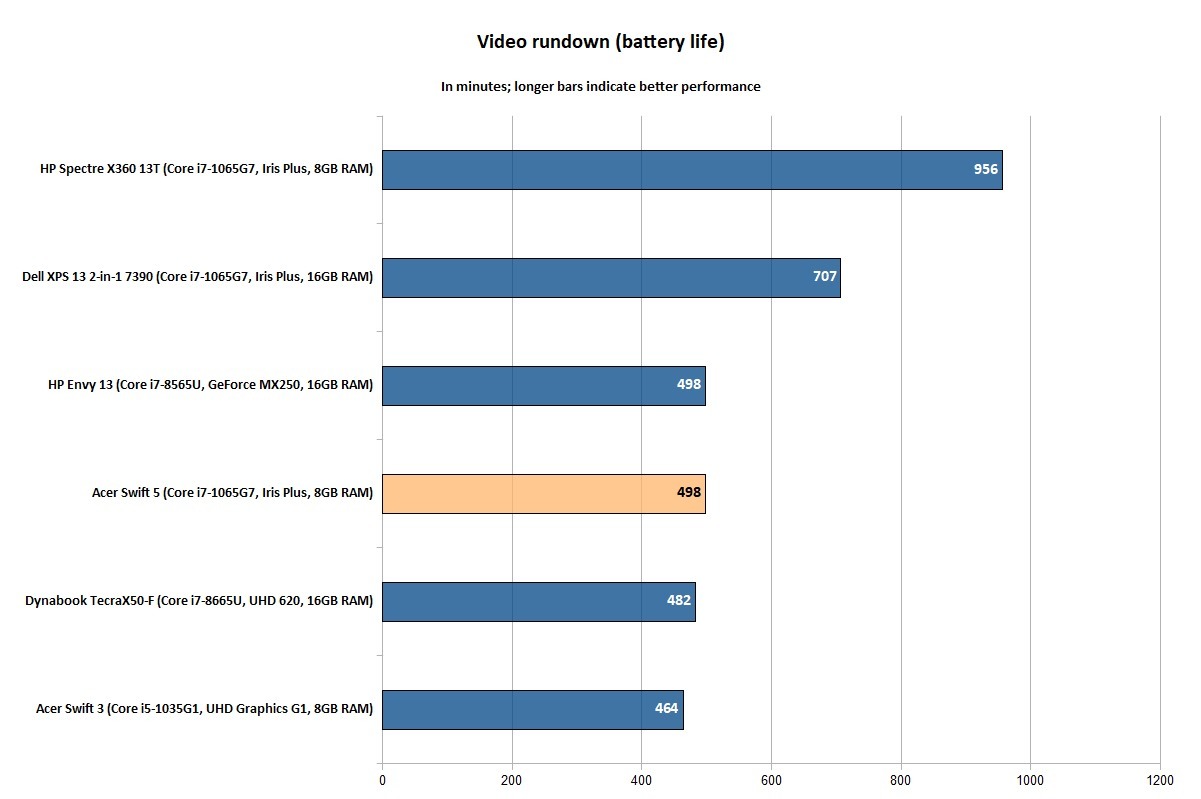 It’s a sacrifice I’m fine with, honestly. The Swift 5’s been an excellent traveling companion the past few weeks, a machine I can toss in my bag and simply forget about for hours at a time. Then I pull it out and voila, a full-sized laptop. It’s a small miracle, quite literally.

Could it be better? Sure, in more ways than one. You’d have to compromise that portability though, and I’m not sure that’s a compromise I’m willing (or Acer’s willing) to make. It’s a one-trick pony, but it’s a damn good trick.

The Acer Swift 5 is one of the lightest clamshell laptops ever made, but it compromises performance and battery life to take home that honor.

Previous ArticleNvidia Pulls Out of MWC 2020 Over Coronavirus, Despite Being a Major Sponsor of the Trade Show
Next ArticleFacebook Warns of Hit to Oculus Production From Coronavirus
Comments (0)

Don't miss a deal at Bodybuilding
Best offers at Ticketmaster UK
Discounts, Sales and Deals at Groupon
Save your money with Boohoo
Online-Shopping with Newegg
Best products at Adobe
Latest Posts