4K at this price seems attractive, but the quality is too compromised for this monitor to be worthwhile

The Acer RT280K is an unusual proposition. For the price, this 4K monitor sits amongst a large crowd of budget 1080p offerings, offering the temptation of high-res goodness without the associated cost. The question is: What’s the catch?

The inclusion of 4K at this price makes this panel tempting, especially if you need plenty of screen real estate or want to watch 4K films – and the 28in diagonal delivers a crisp 157ppi density level. There’s only one problem. By packing in 4K for such a low price, there are inevitable compromises elsewhere.

That said, it starts well with a 10-bit colour panel, which means gradients of colour should (in theory) be reproduced with far more granularity than 8-bit or 6-bit displays. Unfortunately, it’s married to cheaper TN (twisted nematic) panel technology, while many current monitors use IPS. TN’s major advantage, other than price, is speed, and Acer exploits this with a rapid 1ms response time. Any competitive gamers, though, will immediately stop caring once they see the 60Hz refresh rate and lack of any syncing features. 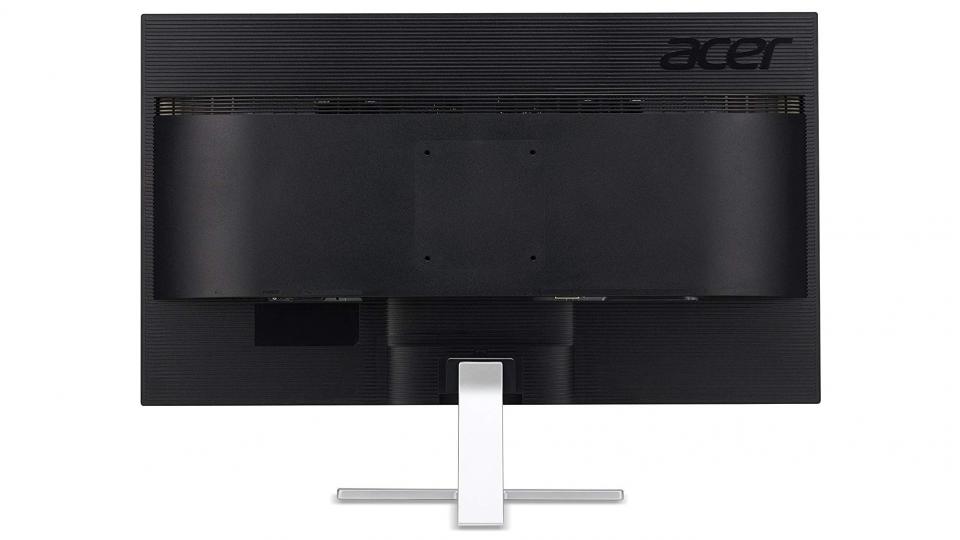 It’s limited in other ways, too. There’s no height adjustment or swivel support, and only 20° of tilt movement. It doesn’t support pivot mode because of that limited stand, but it does support VESA 100 mounting. There are plenty of inputs, with a choice of HDMI, DisplayPort and DVI, along with two audio jacks, but no USB ports. Acer includes speakers but they’re incredibly tinny – nowhere near good enough for music or movies.

Its aesthetic is mixed, too. The small, slim base is made from bright metal, and it looks good, but the Acer is one of the few screens still sporting chunky bezels, and it makes the whole unit look dated.

Then we come to image quality. Its average Delta E measurement of 3.65 is unequivocally poor, with a 9.35 maximum Delta E similarly disappointing. The high Delta E figures weren’t a rare occurrence on this screen, either – they were found throughout the colour spectrum.

Those poor Delta E figures were joined by a colour temperature of 7,174K, which is far beyond the 6,500K ideal figure and results in a cool-looking image. A middling sRGB gamut coverage level of 89.1% is fine for watching media and playing games, but it’s not quite high enough for any professional tasks that demand good colours – and the low accuracy put paid to that idea anyway.

The final kicker is contrast. A brightness level of 323cd/m2 is fine, but the RT280K’s black point of 0.37cd/m2 is too high – which means an underwhelming contrast ratio of 872:1. Such lack of contrast isn’t a disaster, but means that this screen lacks punch and depth. It’s also not brilliant when it comes to picking out subtle tonal changes. And, thanks to the Delta E and colour temperature figures, the screen was both inaccurate and pallid.

Other screen modes weren’t much help either. The Graphics and Movie modes marginally improved the Delta E average to around three and ramped the contrast up to around 920:1, but both results are still poor and the colour temperature was still too chilly.

The Acer, surprisingly, has decent uniformity. We recorded its peak brightness variation of 15% along the top edge of the screen, and in the vast majority of other areas the panel’s brightness varied by less than 10%. Its Delta Es remained remarkably consistent across the panel’s 28in diagonal, too.

Good uniformity isn’t enough to save the Acer RT280K, though, which has a few good points that are undermined by poor quality in several important departments. Its Delta E measurements, chilly colour temperature and low contrast make for an underwhelming screen, and it’s paired with awful speakers and a design that’s long in the tooth. This screen doesn’t have many adjustment options or ports, either.

The Acer’s biggest selling point is its 4K resolution, and offering 4K for this price is certainly going to attract buyers. But, when the Acer’s image quality is so poor, investing in a cheap 4K is a false economy. You would be better off spending a little more on a 4K with better quality – or settling for a better 1080p screen.