While the Intel years were good for the Mac, Apple needed something to take its computer to the next level. That something now comes in the form of Apple’s own system on a chip (SoC), called the M1. Along with macOS Big Sur (the OS built for the M1), the Mac makes breakthroughs in performance and battery efficiency that were never possible with Intel silicon.

Apple made bold claims during its “One more thing event” on November 10. The company said its new 13-inch MacBook Pro’s M1 CPU is up to 2.8 times faster than the 1.7GHz quad-core Intel Core i7 in a same-sized MacBook Pro. (This Intel Core i7 was available as a built-to-order option for the previous $1,299 13-inch MacBook Pro, a machine that came standard with a 1.4GHz quad-core Core i5 when it was released earlier this year.)

We don’t have this specific laptop that Apple uses for its performance comparison. But we do have three other MacBook Pro models that can help us draw some conclusions as we test them against the 13-inch MacBook Pro M1. Specifically:

So what did we find out? Well, we might not have been able to replicate Apple’s 2.8 times increase in performance, but what we did see was exciting nonetheless. Sometimes the results left us awestruck. 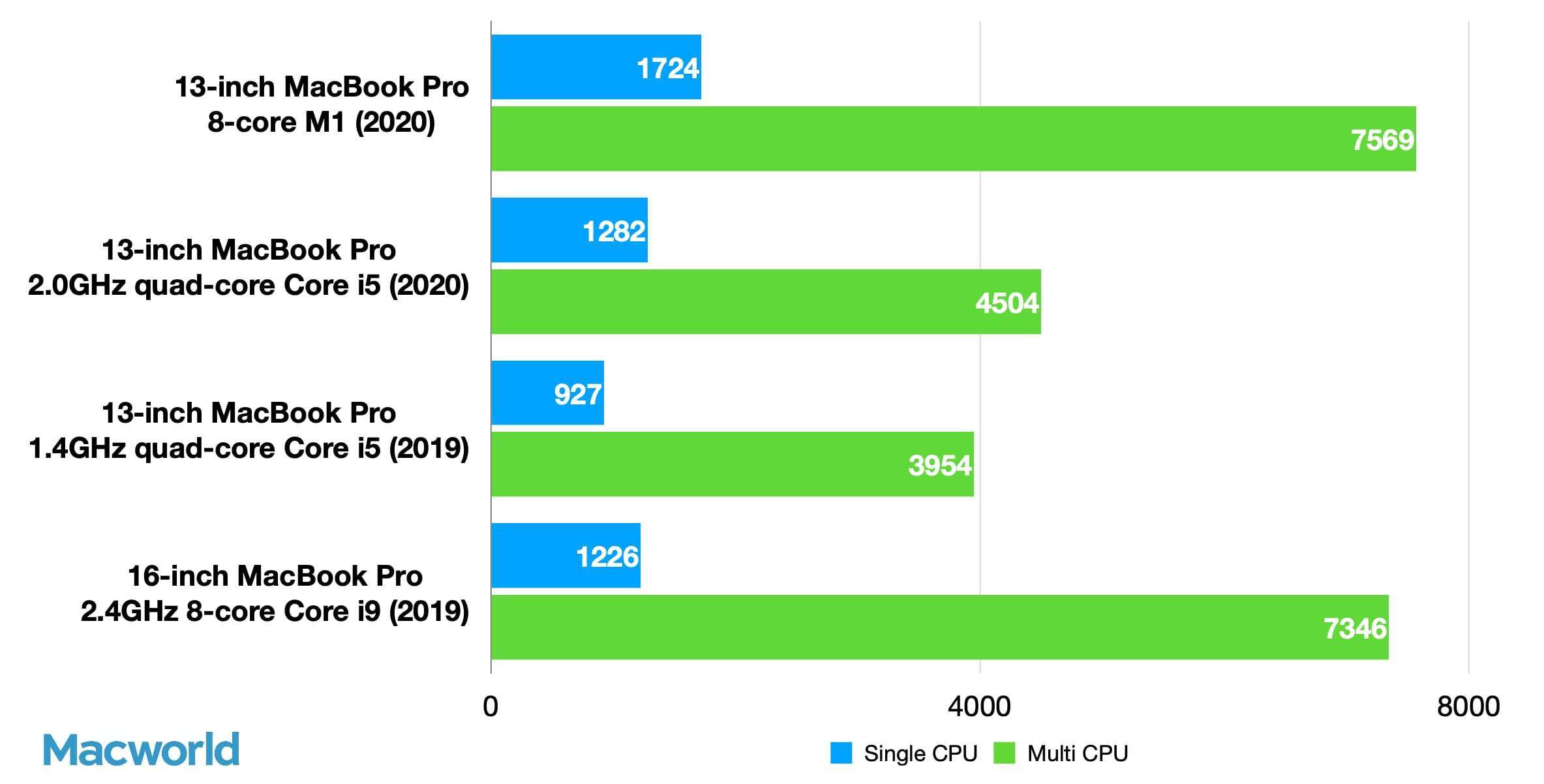 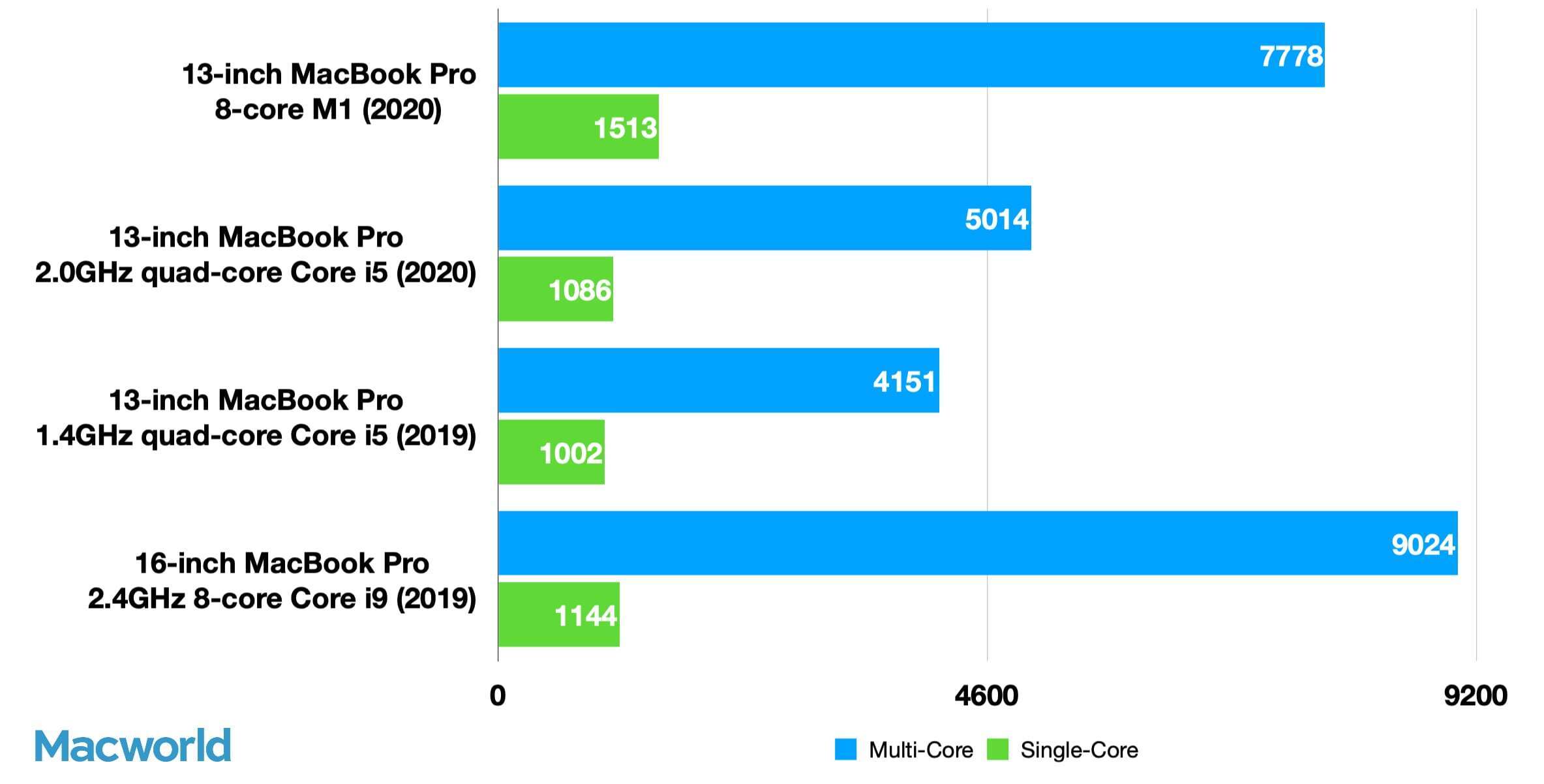 Our Geekbench 5 and Cinebench R23 scores were collected using “Universal” versions on those benchmarks, which means the M1 MacBook Pro was able to run native versions of the tests, taking advantage of all the optimizations built into the Apple silicon chip and macOS Big Sur. So, to see what performance is like when running in emulation mode, we ran Cinebench R20, which only supports Intel processors natively. When this test runs on an Apple-silicon Mac, the machine uses Rosetta2, an on-the-fly translator. 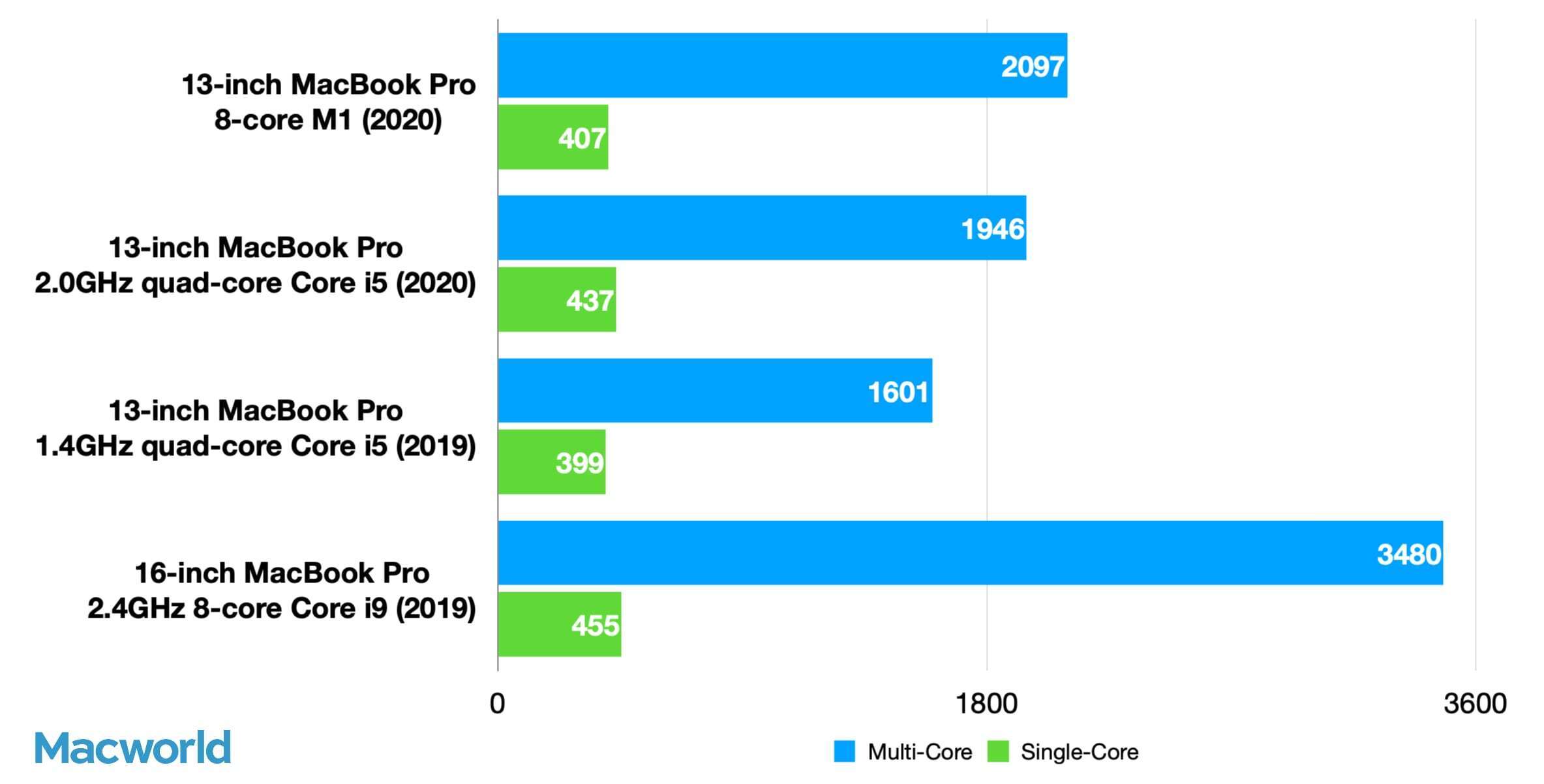 A portion of the M1 SoC is dedicated to an 8-core GPU, which replaces the integrated Intel graphics in previous machines. With the $1,299 and $1,499 Intel-based 13-inch MacBook Pros, the graphics performance was acceptable for most tasks, but you had to lower the graphics settings in demanding games in order to get acceptable frame rates. Let’s see if the situation has improved.

Rise of the Tomb Raider benchmark 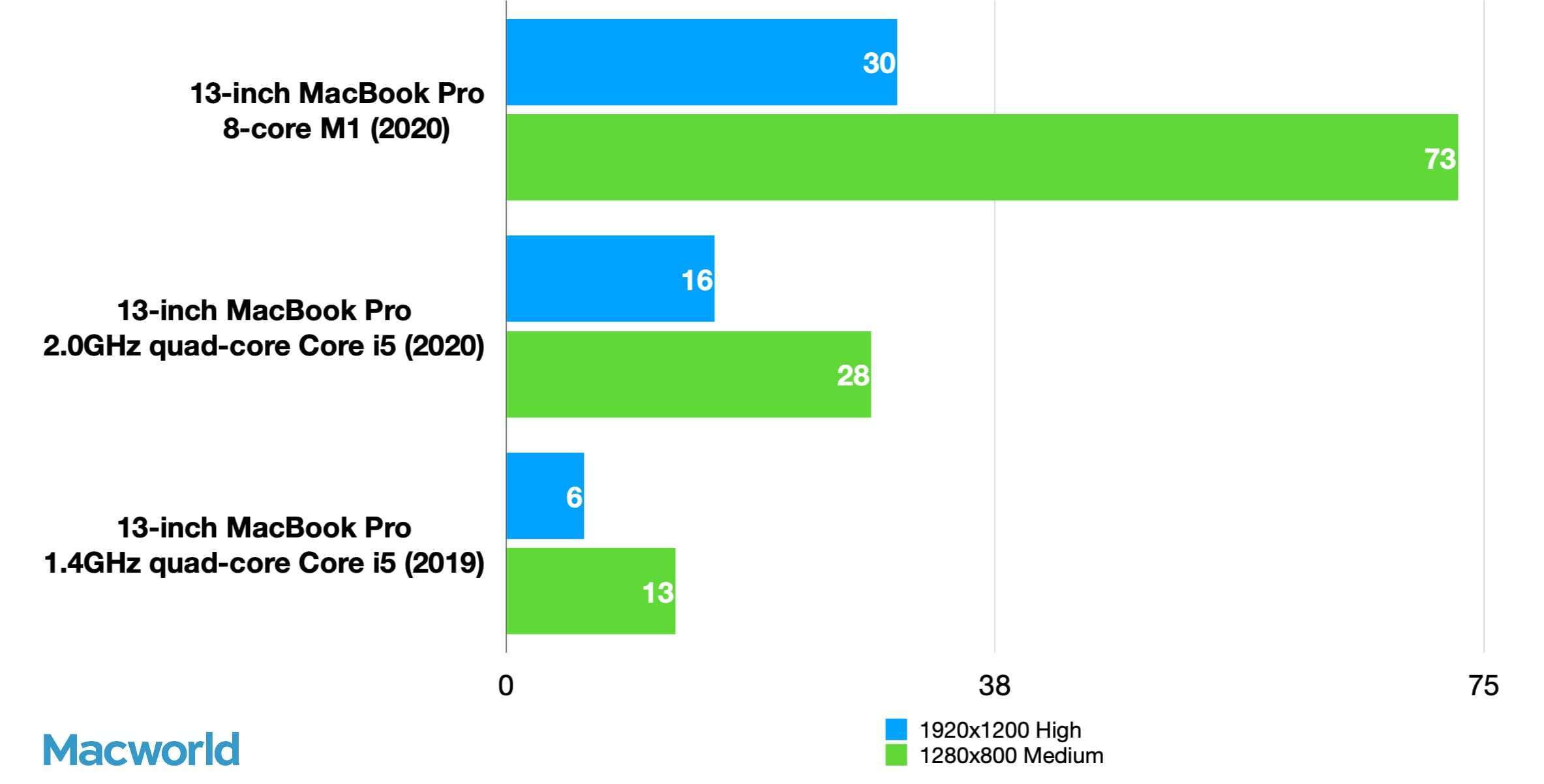 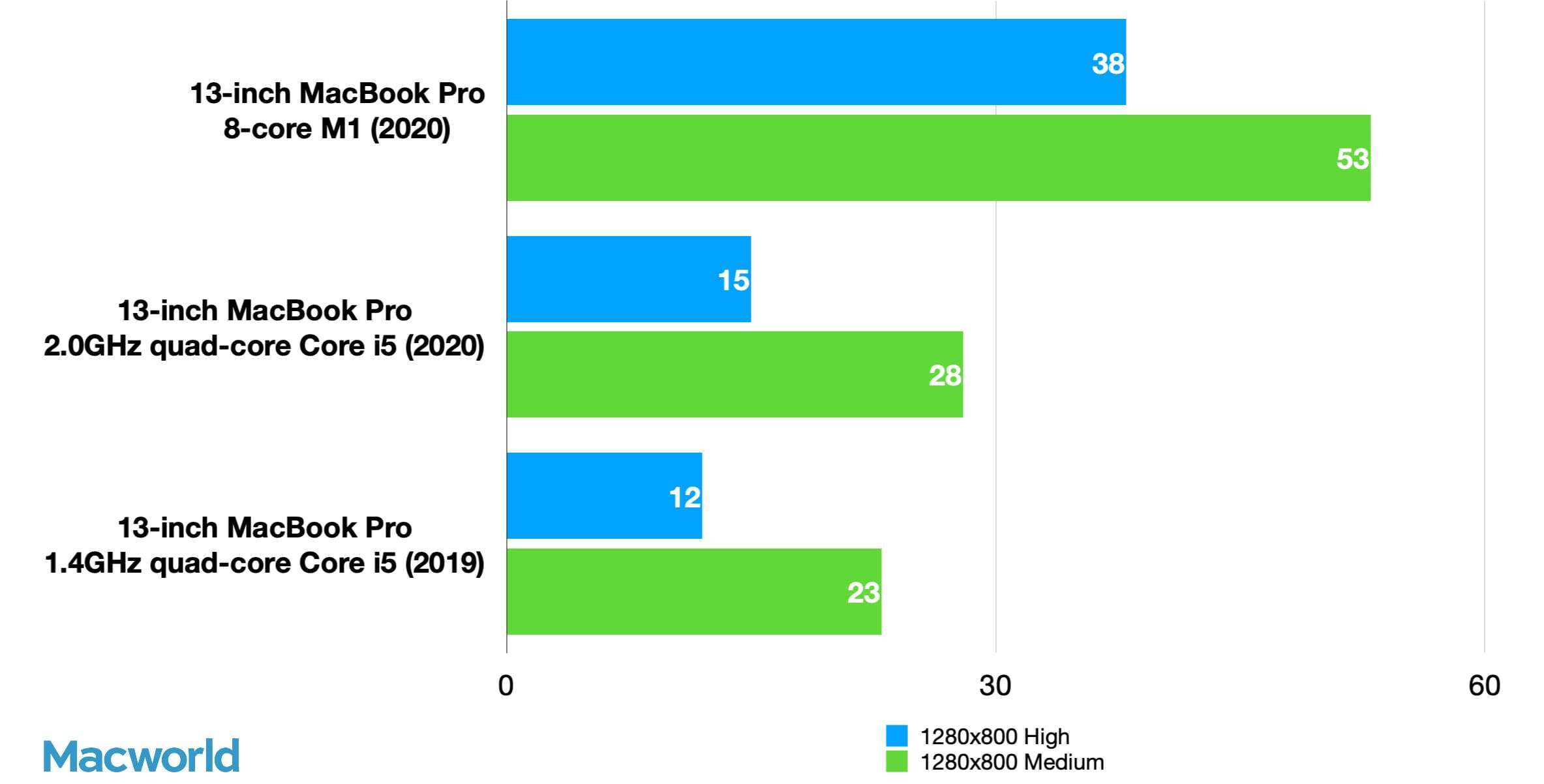 Mac games with native code for Apple silicon aren’t available yet (unless you include iPhone and iPads). But we were curious to see what kind of performance we would get with a couple of Mac games that use code written for Intel processors. We ran Rise of the Tomb Raider and Civilization VI, and came away impressed. With either low or high quality settings, the M1 MacBook Pro drastically improves upon the graphics speed of the other 13-inch laptops in our testing.

So what about native graphics performance? Lacking any optimized games, we used the Compute benchmark in Geekbench 5. And with either OpenCL or Metal, the M1 MacBook Pro provides the graphics boost that users of lower-priced Macs have been yearning for. 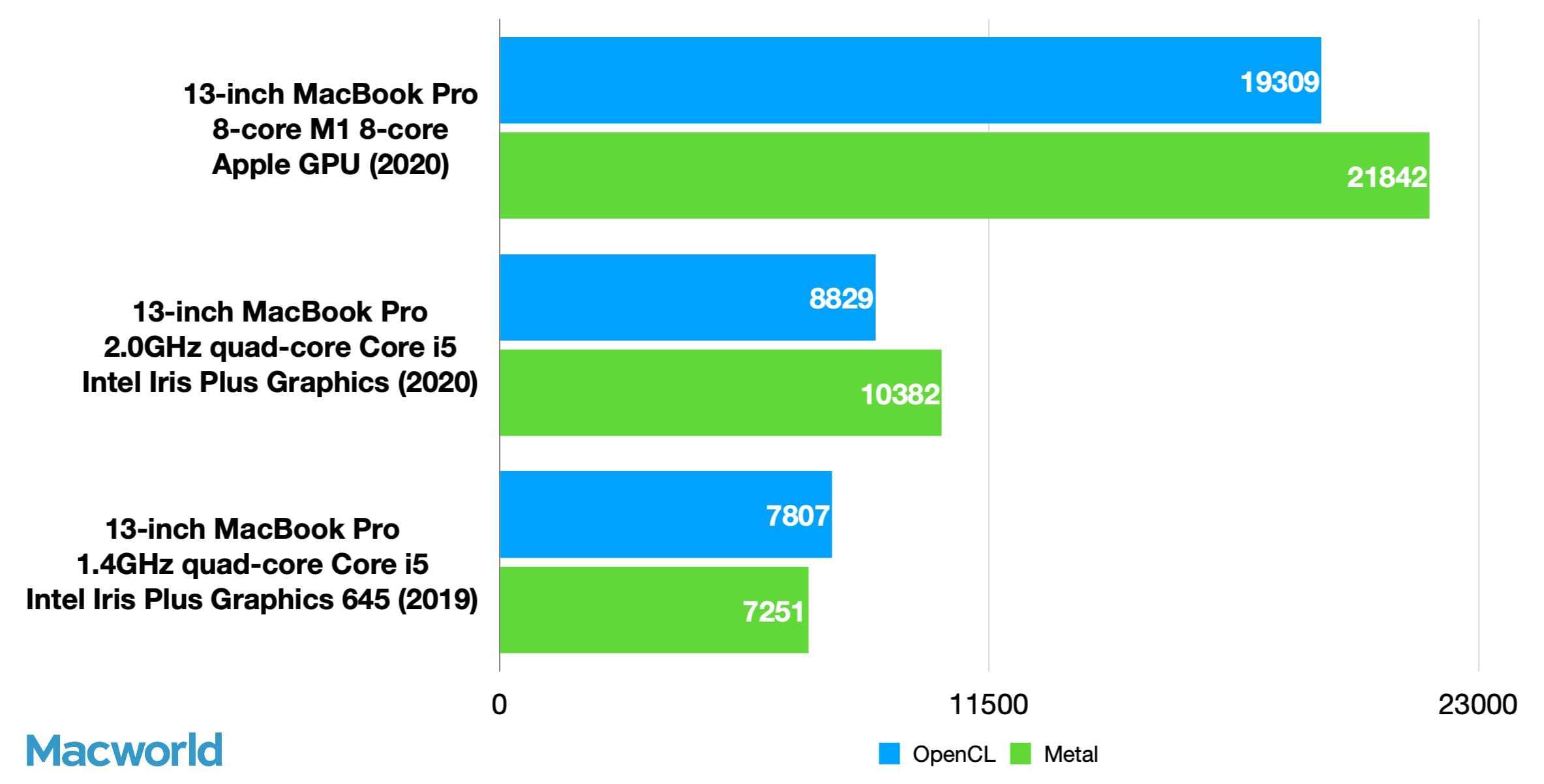 Of course, benchmarks aren’t the only way to gauge performance. There’s also the palpable feel when you’re using a computer. Now, when you’ve been reviewing Macs for as long as we have, getting a feel for speed improvements is difficult. Usually, we’re dealing with a 10 to 15 overall percent speed improvement year over year, and that’s difficult to gauge outside of benchmarks.

But this wasn’t the case with the M1 MacBook Pro. Everything on the computer has a crisp snap to it, including app launching, and windows opening and closing. In Safari, the speed is even more noticeable, with faster loading webpages and smoother scrolling. When Apple’s Craig Federighi demonstrated instant wake during the “One more thing” event, it showed me how I’ve simply accepted the fact that Intel-based Macs don’t instantly wake from sleep. While it’s only a lag of a few seconds, it’s a lag that’s now gone on the M1 MacBook Pro.

The key to all these performance increases is using software optimized for the SoC. So, before you buy an M1 laptop, check to see if the software you use most often is available as Universal binaries, meaning they include both Apple silicon and Intel versions. (Some developers may distribute software specifically for Apple silicon.) If your primary apps are Apple apps, you’re in luck, as Apple has updated its apps to take advantage of the M1. 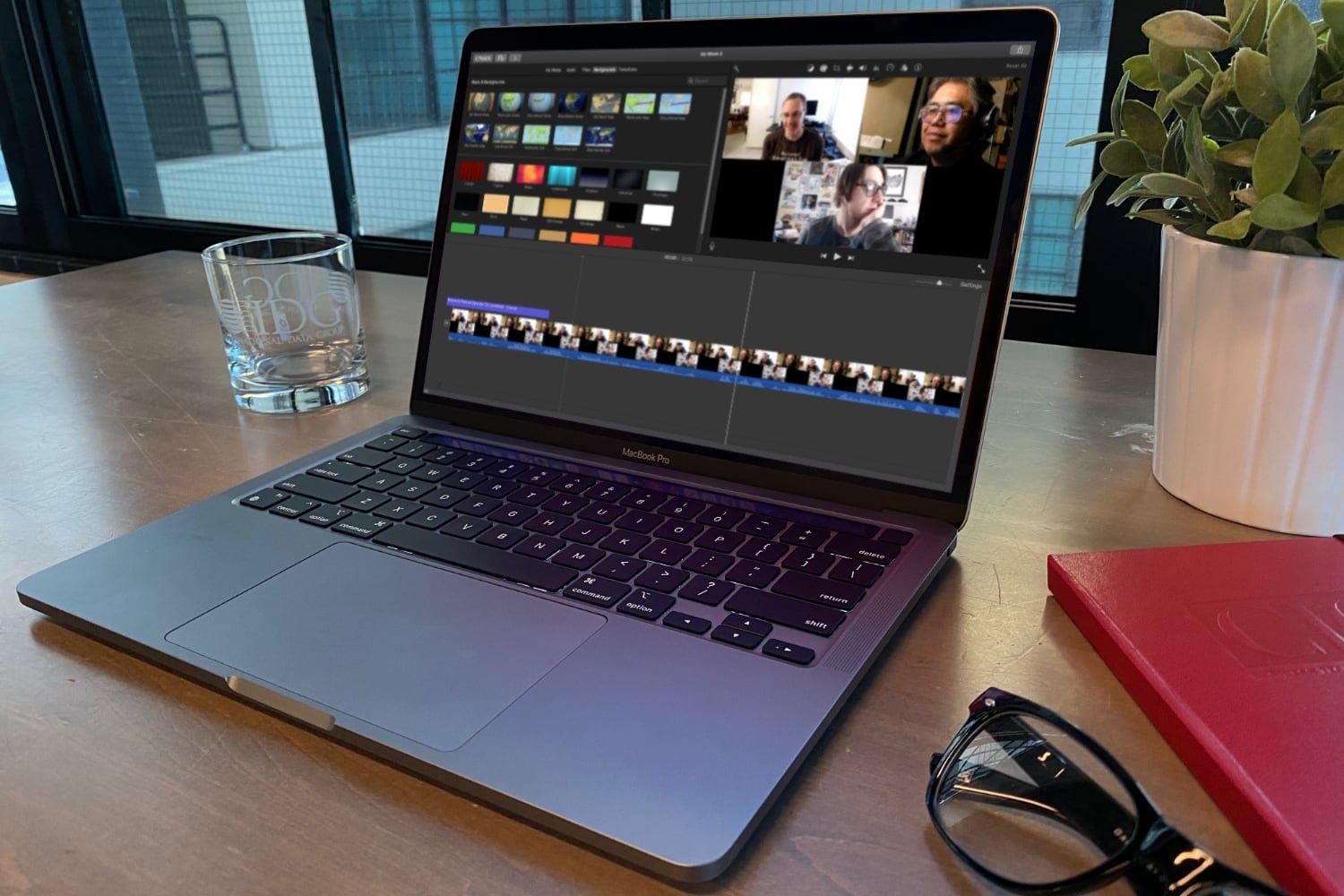 The M1 is referred to as a “system on a chip.” Before the M1, a Mac laptop had several different chips that served different purposes. You would have a chip for the CPU, chips for RAM, controllers, and more. Apple has now combined all those chips into one, the M1 system on a chip (learn more about Apple’s M1 chip here).

There are many advantages to a SoC, such as better performance and power efficiency, and it takes up less room on a motherboard. But there are also some compromises, such as the inability to upgrade memory. Owners of previous MacBooks are probably used to this, anyway—it’s been a while since Apple allowed users to upgrade RAM after initially buying the laptop.

But another compromise is there are currently only two available RAM options: 8GB or 16GB. For many power users, 16GB in what’s supposed to be a “pro” machine isn’t enough. They’d like at least 32GB. That seems to be one of the reasons why Apple still offers the 13-inch MacBook Pro with Intel chips, as those laptops support up to 32GB of RAM.

Now, there’s a possibility that, just as we need to rethink clock speed as other aspects of computer processing, we need to rethink memory. Apple’s SoC uses what it calls “unified memory” and developer and blogger Howard Oakley has an interesting article about it. How we think about the amount of RAM needed in a Mac needs to evolve now that the M1 is here.

If you just can’t wrap your head around the idea of having only 16GB of RAM, you have two choices: get an Intel-based laptop, or wait. Remember, this is the very first Apple silicon chip for Mac. Sometime in the near future, Apple will likely release a chip that uses more memory. (Apple has not commented on its silicon release schedule and what chips it will include.)

Besides performance, Apple claims another advantage to an SoC is improved power efficiency. The M1 Mac is better at managing the power it uses, which means better battery life. To gauge how long the battery will last, we ran a video at full screen on a continuous loop until the battery ran out. 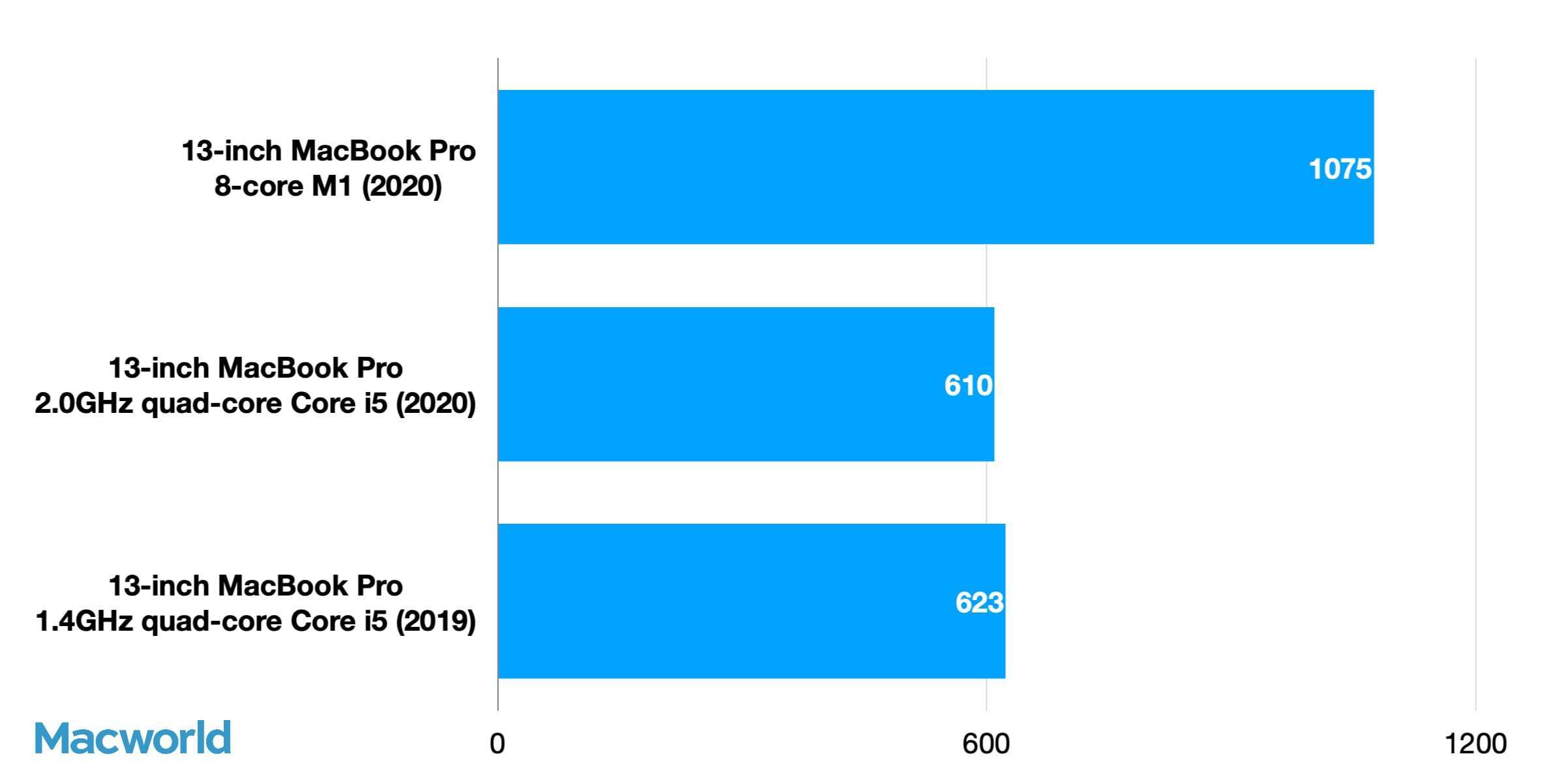 Apple states that the battery in the machine we tested will last up to 20 hours playing video. We didn’t get 20 hours, but we got darn close with almost 18 hours. The other two 13-inch laptops we tested lasted 10 hours. In the past, we’d gladly take whatever we can get when it comes to battery improvements with the MacBook Pro, usually an extra hour or two. But to see this much improvement, well… it’s sort of mind-boggling.

From the outside, it’s the same MacBook Pro

The M1 MacBook Pro has the same design, keyboard, and Touch Bar as the Intel-based models they replace—and they’re also the same as the parts found on the current, higher-priced Intel 13-inch models. Our opinion of these aspects of the 13-inch MacBook Pro hasn’t change, so we won’t repeat ourselves here. But if you are interested in what we think, take a look at our review of the $1,799 13-inch MacBook Pro and check out the sections on the keyboard, Touch Bar, storage, and more. 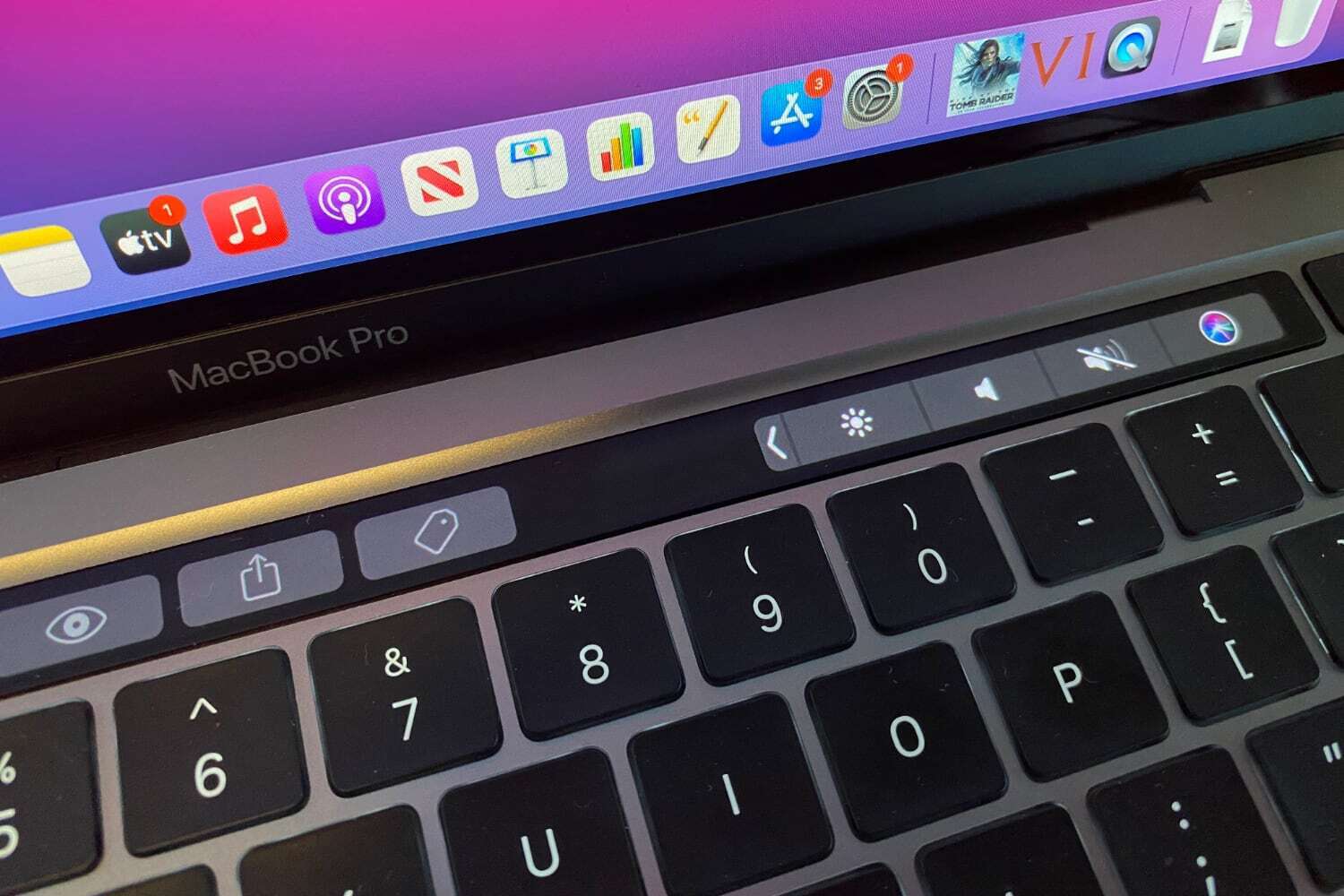 One major complaint that could be made about the M1 MacBook Pro is that it uses a 720p FaceTime camera. Apple did improve its performance though its image-signal processor, but it’s still a 720p camera in a world where 1080p cameras should be the norm.

The M1 MacBook Pro fills out the lower-end of Apple’s 13-inch MacBook Pro lineup, and these models have only two Thunderbolt/USB 4 ports, both on the left side. If you’d rather have more ports than resort to using a hub, you need to invest in a $1,799 or $1,999 Intel model, which have four ports, two on each side. Or you can wait and see if Apple updates these pricier models with Apple silicon at a later date.

If the FaceTime camera and the two ports aren’t enough to temper the excitement, maybe this one issue will: the M1 MacBook Pro is limited to one external display, which can run at 6K resolution at 60Hz. If you need to attach at least two external displays, you have to get the $1,799 or $1,999 13-inch MacBook Pro models with Intel processors. They can handle two displays running at 4096×2304 resolution at 60Hz. Also, external GPU devices are not supported.

Overall, we like the MacBook Pro design. It’s attractive, practical, sturdy, and familiar. But it’s a design we’ve used for some time now. It would’ve been nice for Apple to introduce something new, though this may be a trite complaint, considering how well the MacBook Pro works. 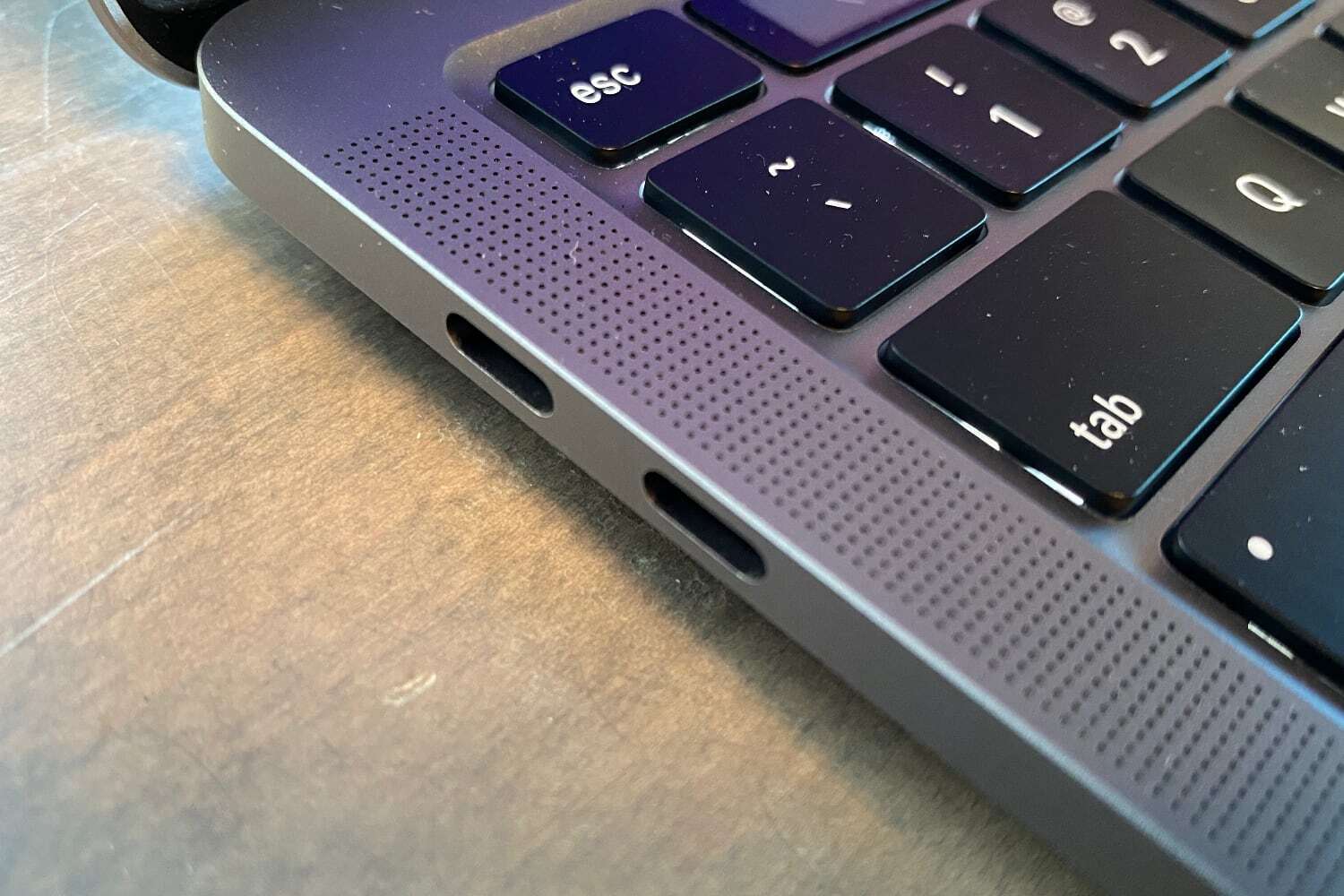 I was giddy during the first couple of days using the new 13-inch M1 MacBook Pro, and each time I witnessed another broken benchmark record, my excitement levels rose. Then there’s the battery that seems like it could go on forever, even when you’re doing serious work. I’ve seen and tested a lot of Macs—I did testing for MacUser Labs back during the Motorola 68000-to-PowerPC transition, and I even reviewed the first Intel Macs for MacAddict. But this… this is something else. This is a revolutionary moment for the Mac.

You need to have software written for Apple silicon to get the speed, but I can understand if you can’t sit on the sidelines and wait. Even if your apps aren’t Universal yet, they probably will be soon. In the meantime, if you use a non-native app, it will run under Rosetta2 emulation, and the performance is acceptable.

However, there are a couple of other reasons to wait. The first is that this is just the start of the Apple silicon rollout, and Apple’s next step could be chips with more RAM, a discrete GPU, or support for more than two Thunderbolt ports. (This is all speculation. Apple hasn’t announced anything.) If those are features you want in a pro-level laptop, then wait.

The second reason to wait is that you work in a production environment and need to connect several devices to the Mac or you use specialized software. If this describes your work situation, check into compatibility before buying.

But if you don’t need those features, or you’re not in a production setting, then invest now in the 13-inch M1 MacBook Pro.